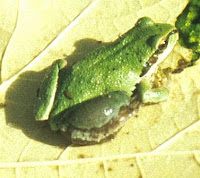 Z is afraid of bugs. Even flies. It's true.

But she loves frogs. She runs around our yard chasing them to catch them and put them in her frog cage. I don't let her keep them overnight anymore. I learned that lesson last year when she accidentally killed a couple of them.

So this week I told her, "Go on out there before dinner and let your frog go."

She went outside and grabbed her cage. I was at the kitchen sink and I happened to look out the window in time to see her throw something over the fence into the neighbor's backyard.

When she came in the house I asked her what she had been throwing over the fence. She just looked at me with this blank stare. "Was it a frog?" I asked.

So today was our lesson in how to release a frog. today's frogs were named Ruby and Star. First, she washed them with purified water (we're big believers in returning animals to the wild cleaner than when they were removed from the wild). Then she took them back to where they had been captured and released them near their "homes". She wants to start a list so she can make sure she doesn't accidentally catch one twice.

I've taught her to consider all of the frogs her pets once she releases them. They all belong to her, so she needs to take care of them.

That includes not hucking them over fences. I went upstairs to look out the window and make sure the neighbors weren't out there. I'd hate to have to go over and explain why my daughter was throwing frogs on them.

Viva la frogs!
Posted by Matt Mikalatos at 12:01 AM