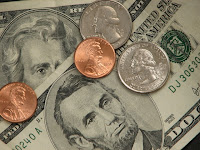 On the way to Z's soccer practice we have to stop on the highway offramp for a traffic light. Most weeks someone is standing at the bottom with a sign asking for money.

This week it was a guy in his forties, lean but well-kempt. He had the look of an ex-military guy. He was serious and looked vaguely humiliated to be out there with a sign.

I purposely drove up so I was past him, trying not to meet his eyes. He was standing alongside the car, looking off behind us. The light seemed to stay red forever, and every second that passed I was reminded of the cash in my wallet.

I had three dollars.

I rolled down my window and said, "Sir?"

He turned and looked at me, and I held the cash out to him. He reached over and took it, and looked me in the eye. "God bless you," he said.

"God bless you, too," I said. He stopped and moved back over toward the window.

"Thank you," I said. I had a feeling that he really did mean it, that his words were not some equivalent to "thank you" but a blessing, a true prayer for God's provision and care in my life. I sensed that I had received something from him far more valuable than three dollars and that my "thank you" was not really sufficient for what he had given me. I knew I should say something more, should let him know that his prayer was appreciated, that it meant something to me, that he had ministered to me in way that mattered more than three slips of paper.

And then the light turned green and he disappeared in the rearview mirror.
Posted by Matt Mikalatos at 8:49 AM