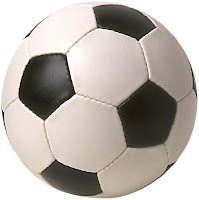 My kids started soccer this week.

Soccer with 4 and 6 year-olds is funny.

First, a butterfly can derail an entire game (or practice) as the children abandon the soccer balls and chase after creation. I sort of like this, and would like to see a "butterfly rule" incorporated into the World Cup.

Second, the league we're a part of is a "fun league" meaning that we play for fun and the building of self-esteem (we voted on whether to buy trophies at the end of the season). So every kid plays at every game and I think they rotate through the positions.

I noticed, though, that the coaches have very different styles. Z's coach is a woman, and she focuses on having fun and building skills. I honestly don't know what will happen when Z has her first game next week, because I'm not sure she understands how to play.

A's coach is a very serious man, who focuses on... GOALS. "Take this ball to the end of the field, then come back and kick it... into the goal. Now let's pretend that the balls are easter eggs and the goal is your basket. Put your eggs... in the basket." Then there was a scrimmage. Which at this age is basically a mob surrounding a ball which occasionally makes some sort of motion toward the goal.

Other favorite kids' soccer rule: "If someone is lying on the ground, everyone stops kicking until they stand up."
Posted by Matt Mikalatos at 9:58 PM

Email ThisBlogThis!Share to TwitterShare to FacebookShare to Pinterest
Labels: A, soccer, Z