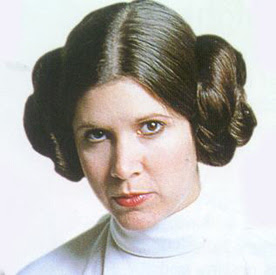 My kids watched Star Wars for the first time in their young lives. They had many excellent comments to share, but here are my two favorites.
Z, our five (almost six) year old was mostly interested in the Princess angle. Lots of questions about Princess Leia. Also, because I've told them the Star Wars stories before, a lot of questions like, "Does that mean that Luke Skywalker is a prince?" But her best comment was from when she first saw Princess Leia and she said, "Princess Leia has beautiful brown hair like me."
A, our four year old, was reasonably convinced that Star Wars was meant to be a comedy. She told me multiple times that the movie was alernately boring or funny. The boring parts seemed to be the ones that she deemed "serious." 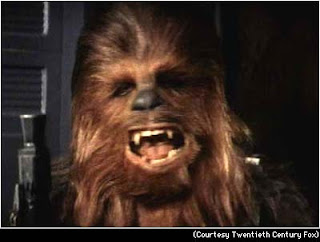 The funniest moment in this side-splittingly hilarious comedy came when Luke and Han, disguised as stormtroopers, take Chewbacca into the detention center to free Princess Leia. Then they start shooting everything, and they throw Chewie a rifle and he starts shooting everything, too. Here were A's comments on this:

A: HA HA HA HA! That is funny! Even the dog is fighting.
Me: That's not a dog, that's Chewbacca.
A: The dog's name is CHEWBACCA? Ha ha ha! This movie is VERY funny.

Email ThisBlogThis!Share to TwitterShare to FacebookShare to Pinterest
Labels: A, movie reviews, Z