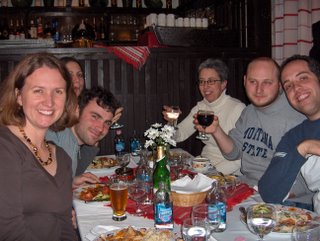 The flight to Budapest had a lot of things to recommend itself... mostly that it actually eventually took us to Budapest.

On the down side, the electrical system went completely berserk about a third of the way through the flight. Reading lights were flashing on and off like a disco-era dance hall. The movie sound would cut in and out. Every once in a while all of the attendant call lights would go on, and then the attendants had to walk around to everyone, wake them up and make sure they hadn't called the attendants.

Also on the down side, the woman in front of us smelled like she was dying. I mean it. I didn't notice it at first, but then my lovely wife pointed out that the poor woman got up every half hour 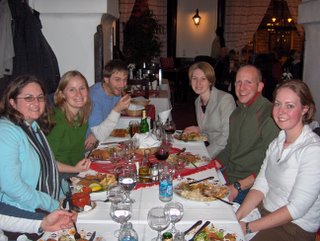 and assaulted us with the highly offensive odor of rotting insides. I felt a little bad for her, but being essentially an evil person, I mostly felt sorry for me.

Again on the downside, we arrived at Frankfurt with only an hour to make it to our connecting flight. Which I wouldn't usually think was a big deal, and probably wouldn't have been if our plane had left on time. Or if the Frankfurt airport weren't the size of an entire city. Seriously! And if I had tied my shoes. I ended up getting blisters running the airport.

I might sound a little cranky here, but there were some good points, too: for instance, they lost our luggage, which meant it got delivered to our second hotel. That was a big plus, actually.

We stayed our first night at "the hotel Regina" which had beds that looked like this: 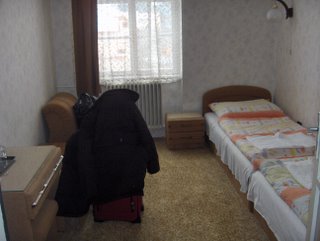 So Krista and I got to sleep head-to-feet.

I also made the semi-classic mistake of not checking the exchange rate before getting money out. You know, everywhere else I' ve been in the world you can barely get an atm to give you more than a hundred dollars, so I figured, well, 150,000 forint must roughly equal 100 or 200 dollars. So I got it out. Try $750!

I had a meeting about two hours after we landed in Budapest, so I rushed off to that. Then we took "The Rijeka Tigers" out to dinner at a 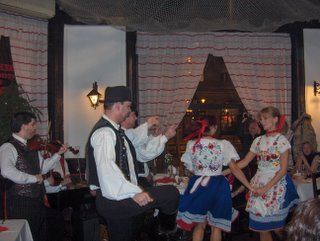 Hungarian restaurant along with Carolyn Culbertson, which meant singing and dancing and also that I got turkey kiev: a stick of butter wrapped in turkey and bread and then deep fried. IT WAS GREAT! I bought dinner, which means that Pete is drinking cola in the picture above. In case you were wondering.
Posted by Matt Mikalatos at 11:12 PM