Failure, Creativity and the Gospel

I've been writing a short series of articles for Cru staff on creativity and the gospel. I posted the first one here (Creativity, Limitations and the Gospel) and since you can't see it on the Cru staff web unless you're on staff with Cru, I thought I'd share the second one here as well: Creativity, Failure and the Gospel. Enjoy.

Artist Derek Holzer says, "I consider it axiomatic that, for any art work to be considered experimental, the possibility of failure must be built into its process."

If we don't fail – if failing isn't even a possibility – then we aren't trying hard enough. We're not innovating. We're not doing anything new. We're static.

After 9/11, increasingly unpredictable situations in the field meant the U.S. military needed more adaptive soldiers. Col. Casey Haskins, who was, at that time, the head of military instruction at West Point, explained the shift that was made in their educational approach, "You had to make it cool to fail."

Here are 3 ways failure helps us to become better ministers of the gospel: 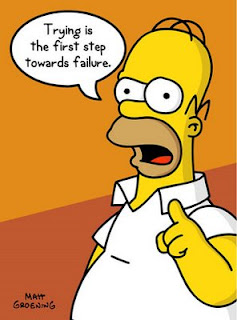 I know not to put a hot pan on a plastic tablecloth because I once ruined a pan, a tablecloth and my dinner. That’s also how I learned to check my jeans for my wallet before washing it. And, immediately afterward, how I learned not to "dry my wallet" in the microwave. Failure gives us a visceral lesson that's stronger than memorized guidelines. Failure in sharing the gospel teaches us what works and what doesn't.

I visited a team once that believed that "the Gospel didn't work" where they ministered. They had built a decent ministry by collecting believers in their area. I asked how they were attempting to share the gospel and the simple answer is that they were not … they were afraid that failure would drive away the "faithful." With a little encouragement the team agreed to try to share the gospel. Many of their attempts failed (the gospel was unclear to some who heard), but some worked. And they began to incorporate the gospel into their ministry. Someone even came to Christ through (gasp) a religious tract.
Sometimes we settle for "what works" in ministry. This leads to stagnation. This is the same as saying, "This is successful and I don't want to fail by trying something new." Don't (only) do "what works" – be constantly on the lookout for improvement and "what works better."

3. Failure gives us something to laugh about.

I shared Christ with a cult leader once using a survey I had invented. He backed me into a corner and shared his own version of things without him ever hearing the true gospel. I have friends who handed out cigarettes to anyone who would come to their church services. Failure makes us laugh, reminds us that we are human and that it's not our technique or skills that draw people to Christ, but the power of God. If we refuse to fail, we take ourselves too seriously. We think too highly of ourselves.

Posted by Matt Mikalatos at 7:20 AM