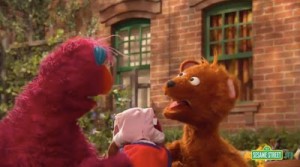 I was surprised to see last week's article by Owen Strachan talking about an episode of Sesame Street in which Baby Bear (who is male) plays with a baby doll. Telly the monster tells Baby Bear this is dumb, but resident wise sage Gordon tells him it's okay. Like this:

Baby Bear: It’s a doll
Gordon: So?!
Baby Bear: So…Gordon…I’m a boy, and dolls are for girls!
Gordon: Says who?

Strachan explains that this is the undermining of Protestant values, because boys shouldn't be taught to play with dolls, and that after this confusing message from Gordon, Baby Bear needs the Gospel.

While I sympathize with Strachan's concern that boys might grow up to be nurturing fathers, both he and Sesame Street are missing the point.

The fact is, Baby Bear should not be playing with baby dolls. He is a bear. And socializing him with humans (let alone human babies) can only bring grief. 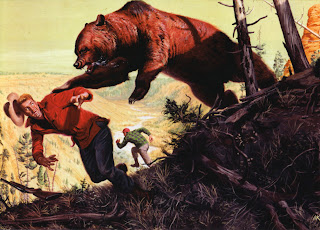 I know, you might think I'm overreacting, but the Bible is very clear on the role of bears in human relationships. They are meant to be voracious killing machines. I mean, the ONE COMMAND God gives specifically to bears is to "Arise and devour much flesh." This attempt to anthropomorphize and humanize bears strikes at the heart of everything the gospel teaches about bears.

If Sesame Street hadn't completely capitulated to heretical ursine views, the conversation between Baby Bear and Gordon should have gone something like this:

Baby Bear: It’s a doll.
Gordon: So?!
Baby Bear: So…Gordon…I’m a boy, and dolls are for girls!
Gordon: No, you're not a boy. You're male, but boys are human. You're a male bear cub. Now put that doll down and tear into it with your teeth. That's right, really rip into it. Pull the head off... good! Good bear! Now go for the entrails!

Or, even more correct:

I, for one, take this issue seriously in my family and at the organization I head up, The Council on Biblical Interactions Between Humans and Animals.

In fact, because of Teddy Roosevelt's (the Dutch Reformed Episcopalian President) undermining of the scriptural role of bears in the family, I have been training my own children in the godly way to interact with bears. I include a few instructive photos here for all the parents:

One, teach your child that cuddling her teddy bear is not appropriate. Should she come across a real bear, the bears would either smother her when they roll over, or possibly eat her.


Second, kissing bears is right out. They will eat your face off. Do not allow your children to kiss their teddy bears.


This is the correct way to play with teddy bears (or any bears at all). Lay on the ground, roll into a ball and play dead. Even if they are leaning in close to your face, about to take a big bite.

Under NO CIRCUMSTANCES should one attempt to lift a bear by its hind legs. You will probably get a hernia and/or be swiped by its claws, smashed beneath it, eaten or mauled.


I've also taught all three of my daughters this helpful proverb: "Never go to a teddy bear picnic because you just might be on the menu."

You can see what others are saying about this conversation in a variety of places:

My friend Caryn Rivadeneira's thoughts.
Some thoughts from a preschool teacher. (ETA: Oops. Kristen is not a preschool teacher. She's a paralegal But it's still a good read.)
Rachel Held Evans has a good post where people from both sides of the question are having a civil conversation on the topic.

There are a bunch more out there, too. No one mentions the bear angle, but that's why you come here... FOR HARD HITTING JOURNALISM THAT ISN'T AFRAID TO CALL IT LIKE IT IS!

Now, in the comments: How are you preparing YOUR children for the coming Bearpocalypse?
Posted by Matt Mikalatos at 9:12 PM