Today we have a guest post from my friend Alex Hughes. Alex has written a book called Clean, and one of my favorite supporting characters in that book is a guy named Swartz, who is trying to keep the protagonist "clean"... he's wrestling with an addiction to a particularly nasty drug. Swartz is a straight-shooting, no nonsense old man who isn't intimidated by the protagonist... or the fact that that protagonist is a telepath. Read on for a little bit about the book, and then Alex will share a little about where Swartz came from in real life. 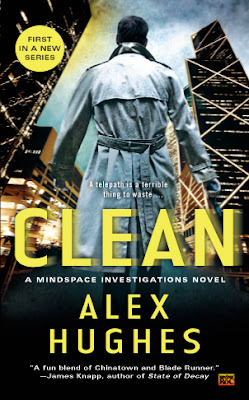 Back of the Book:

A RUTHLESS KILLER—
OUT OF SIGHT, OUT OF MIND

I used to work for the Telepath’s Guild before they kicked me out for a drug habit that wasn’t entirely my fault. Now I work for the cops, helping Homicide Detective Isabella Cherabino put killers behind bars.

My ability to get inside the twisted minds of suspects makes me the best interrogator in the department. But the normals keep me on a short leash. When the Tech Wars ripped the world apart, the Guild stepped up to save it. But they had to get scary to do it—real scary.

Now the cops don’t trust the telepaths, the Guild doesn’t trust me, a serial killer is stalking the city—and I’m aching for a fix. But I need to solve this case. Fast. I’ve just had a vision of the future: I’m the next to die.

Swartz, the character in Clean who guides the hero through recovery into health, had a real-life counterpart. His name was Theo, and he was a friend of my father’s. I say “was” because he passed away last month, after a sudden and devastating diagnosis of cancer. I never got to say goodbye.

Theo was a sponsor at Alcoholics Anonymous for many decades and served as the personal mentor for literally dozens of recovering alcoholics. He was kind enough to sit with me for hours of interviews, telling me of his life and his journey with substance abuse. He held nothing back, and those conversations over coffee and breakfast profoundly touched both me and my work. He even took me to a few AA meetings and introduced me as one of his friends – this despite me being decades his junior and very much outside of his world.

The generosity of spirit that Theo showed me cannot be fully put into words. The trust he showed me – and his support he gave to my work – was something that could not be earned. It was given freely. This incredible man, who guided dozens of men into health and new life, chose to give me a little of his time, and in so doing made me a better person.

To Theo: I will miss you. May God give you the great reward you so richly deserve, and shelter you under the shadow of his wings.


Order Clean today on Amazon.
Barnes & Noble.
The Book Depository:
Or at your local bookstore!

Thanks for sharing about your book, Alex! And people... I read this book, it's great. Go get it!
Posted by Matt Mikalatos at 3:53 PM