Eight Bible Characters to Have on your Zombie Survival Crew

Today we have a guest post from my friend Clay Morgan, author of Undead: Revived, Resuscitated, and Reborn

. Clay's book RELEASES TODAY. You should go buy it! Clay's contact info and website are listed at the bottom of the post. Before you get started on this fun post, in which Clay shares which Biblical characters he'd like to have on his side during a zombie apocalypse, you should probably see this picture, which gives you some insight into Clay's fun-loving nature:

8 Bible Characters To Have On Your Zombie Survival Crew

It's the obvious question that apparently no one is asking. If you were alive during the time of the Old and/or New Testament and faced an uprising of the undead who would you want on your zombie survival crew. It's high time we figure this one out. FOR HUMANITY'S SAKE.

Now I hear some objections rising to the surface like the living dead from their graves, so let me address those concerns here and now.

Objection #1—This is stupid.
·
Response: "The fool says in his heart, 'There is no God."

Objection #1a—What does that have to do with zombies that aren't real from 2,000 years ago?!
· 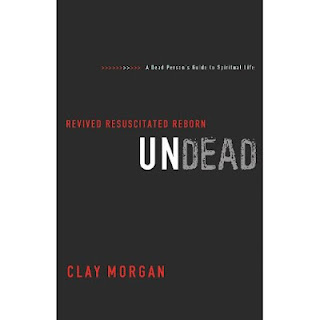 Response: Okay, the truth is that my new book Undead: Revived, Resuscitated, and Reborn just came out and I wanted to write a post for Matt that combines zombies and my faith in a nonfiction way just like Undead does.

Objection #2—I wouldn't need a team because I would pick Jesus who just wins.
·
Response: Ah, thought you might go there. I'm invoking Genie from Aladdin rules though. You know, kind of like no wishing for more wishes but instead you can't take the Almighty or anyone else based on potential miraculous capabilities.

So as you can see there is simply no reasonable objection to be made here. Let's move on.

With so much talk about zombie preparedness, I'm surprised more people don't plan on tossing a Bible in their apocalypse go bag. You'll at least want one to get the skinny on the Old & New Testament all-stars that I would take into battle against the undead any day.

So here it is, a zombie survival crew of biblical proportions
1
Moses—Obvious choice. He's a natural leader and isn't afraid to bludgeon evil people. And he did all that work in homemade sandals. I can't even imagine what would happen if the leader of the Exodus got hold of some Nike shoes.
2
Lazarus—I'm referring to post-brought back from the dead Lazarus. First of all, if anybody can get inside the head of dead people it's Laz. Secondly, he's probably a pretty fearless dude since he's already been dead once and all.
3
Jael—You may not remember this woman from Judges 4, but if they had made movies during Old Testament times then Jael would've played Sarah Connor in the Terminator films. When she found a villain named Sisera hiding in her tent she put him to sleep twice—once for a nap and once for good. Know how she killed him? By driving a nail through his head and pegging him to the ground. I need a woman like this if zombies come.

Samson—ALL DAY. Have you seen this guy's fighting résumé? The guy ripped a lion apart with his bare hands and killed 1,000 Philistines with the jawbone of an ass. What?! He was the Chuck Norris of ancient Hebrews.

Luke—We're gonna need a doctor. Plus I just really like Luke.
6
Peter—Always bold and ready to go. Hopefully I don't have too many leaders or "cooks in the kitchen" as they say. Speaking of cooks, Peter's fisherman abilities would make for some good eating in a post-fast food world.
7
David—You HAVE to have David. He's tough and brave and knows how to fight hordes of enemies. I should point out the potential for jealousy here because if any lady survivors do end up under our protection I'm guessing that they'll flirt with David instead of me, but I'm willing to deal with that as long as he brings his "A" game.

Jonah—Let me preface this by saying that I love the story of Jonah and can unfortunately relate to his disobedient, pouting ways. I hope he hangs in there with me, but if we get in a tight spot I'm thinking he'd let me and Jael toss him to the zoms just like he let those sailors toss him overboard. That will buy us some time. He's kind of a fatalist at times anyway and that can bring down overall group morale. And if things do go all bad we can delude ourselves into believing that he could survive in the belly of a zombie since the whole "I got swallowed by a big fish and lived" thing worked out.

What biblical characters would you take on your zombie survival crew?

Clay Morgan is a writer, teacher, and speaker from Pittsburgh, PA who blogs about pop culture, history, and the meaning of life at ClayWrites.com. He is the author of Undead: Revived, Resuscitated, and Reborn about zombies, God, and what it means to be truly alive.
Posted by Matt Mikalatos at 4:00 AM