It's time once again for that old favorite, Ridiculous Reviewers on Amazon! This week's one star reviews come for George Orwell's Animal Farm. Animal Farm is a satire, a fairy tale, a farce and a fable all rolled into one, and all aimed at criticizing Stalin. It's a classic in every sense of the word, and thus many kids across the Western world have been forced to read it in English class in high school.

It's the story of a farm where the pigs take over, form a philosophy and build a collective among the other animals. Eventually, the power goes to the pigs' heads and they start acting like humans, lording it over the animals and making a farm environment that is much worse than anything the animals experienced under the humans.

BUT, let's be clear, just because a book is a classic doesn't mean it's safe from ONE STAR REVIEWS! Let's take a look now.

Seriously, this book is way too scary! I gave it to my 10-year-old to read and he was scared because of all the totalitarianism LOL! DO NOT READ!

Hey! Don't read this! Totalitarianism is scary. Read something a little less terrifying, like a Stephen King novel. 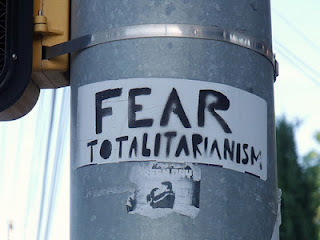 Let's see if we can get any more insight into this topic by reading a review by a kid:

This book sucks so bad I couldn't even get through it. I quit reading it before chapter three. I would not recommend this book to anyone you will waste your time and in the end or whenever you throw it away you'll be asking yourself who would write a book with talking animals?

Kid. You have clearly not been paying attention during bedtime. There are approximately a billion books with talking animals.

This is exactly the kind of book our government wants to force people to read, so they hand it to schools, and try to force us to read it. This book was written by a insane man named George Orwell, who hated society, and displayed that by bashing humanity, and making people look like lower lifeforms than animals. To be honest I think this man is crazy and needs to be locked up.

Well, good news A Customer: Orwell is dead. No need to lock him up. Unless you knew he was dead and thought we should still lock him up, in which case, it shouldn't be too hard to find him. Also, I think it's charming that you think that The Government wants you to read a book about the dangers of government run amuck.

Speaking of government. I'm pretty sure this book is the fault of the liberals. Let's see what "LDS MARINE" has to say about that.

Its is so annoying to see liberals writing books in politics, and i dont care who they attack- Liberals hate everybody else. Stupid guy had to express his feelings and whine about Russia.

I -- I'm not sure what to say. STUPID LIBERALS WHO ARE AGAINST COMMUNISM! Wow. I think that LDS MARINE is giving us a whole new conception of "conservative."

Come on, liberals are people, too, LDS MARINE. And we ALL love Justin Bieber.

Just once I'd like to see a review by someone who is well reasoned and intelligent. Perhaps this next one, since it's from someone who has the name "Jedi Smart."


Read something happier like, oh I don't know, Harry Potter and the Sorcerer's Stone. It's amd excellent read, and with the Holidays coming up, everyone wants to feel happy.

Oh, never mind. Anyway, it's a bit confusing since Harry Potter got its own share of one star reviews.

Hey, if we're not going to get intelligent, well-reasoned reviews, let's just bring the crazy. Maybe Cathy Taurine of Illinois can help:

Did Al Gore direct this? I was just you know, curious because the animals are talking and stuff and they even have like, this hierarchy of power and things don't make sense like that. This is an anti goverment film but all I hear is Total arin ism which gets to be useful when instilled in the drinking water of places like Africa. Well we gave them animals to eat and they just turned them loose in fields and never fed them and they died. This book is co-written I think by Gore and Moore, but who knows I mean anymore you cannot figure out who is who, but I am Cathy and I escaped from Taurine and this is my review of Animal Farm. Oh, and even if you give a pig pickles it will still attack you if it is hungry!

Okay, okay, that was a little too far into crazy town, even for me.

Let's take a look at a classic one star review, and definitely my favorite one for Animal Farm. This comes from Claude Rutabega.  Let's see what Claude has to say:

Of all the things I have ever read! What a terrible and unrealistic story. I mean, how can animals talk? I have a parrot that talks but not in complete sentences. And besides the pigs run the show in this and if it really happened the cats would run things because everyone knows that cats are born leaders. Anyway, I wouldn't reccomend this book to my worst enemy. I read this book to my nephew, Simon and he started crying and now he is afraid of pigs and horses because he says that they will rise up and establish a totalitarianist state and will rule over us. Ughhhh! It gives me a head ache.

Ha ha ha. Oh, Claude. You have brought us around again to the main point of this post: Children are afraid of totalitarianism. And don't worry. I am almost certain that if pigs were to rise up and take over the world, kitties would be freedom fighters. THEY WOULD FIND A WAY TO SAVE US! 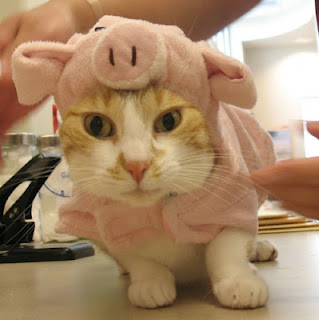 Well, kids, if you're afraid of totalitarianism and it's keeping you up at night, maybe you need some one star reviews to make you laugh and keep you happy. Here are some here:

One star reviews for:

OR, just read them all. I'm not insisting you do this, because this isn't a totalitarianism blog. But if it were, and if you disobeyed me, let's just say you'd be getting a ride in the "veterinary hospital" van.
Posted by Matt Mikalatos at 7:42 AM