Ridiculous Reviewers on Amazon: One Star reviews for William Golding's Lord of the Flies

Over 140 people have given Lord of the Flies

I love this book. I somehow missed reading it until after college, when I ran across it in the library of the high school where I taught. I remember being badly creeped out by the description of the beast on the beach, and amazed at the vividness of the scenes as well as the action. C.S. Lewis described the imagery as "hallucinogenic." That's about right.


It is, essentially, the story of a group of boys shipwrecked on an island, and how their human nature takes over and things go as things will... they take their first steps toward forming a society, and all that entails. Which, of course, leads to violence and power struggles.


It's an amazing book. But that doesn't stop it from getting OVER 140 ONE STAR REVIEWS!


Blow the conch shell, my friends! It's time! For Ridiculous One Star Reviews on Amazon for William Golding's LORD OF THE FLIES!

Before we tread too far, we should make sure what we're getting into. A reviewer named limmortal has a warning for us in a review titled, "Lord of the Flies" Sinks. AAAAAH we're sinking, we're sinking!


This is the only book I've ever read that I actively dislike. I'd be tempted to say that it's an accursed book

Beware, my friends! For the book which we are discussing today is... possibly accursed!


One of the common objections to the book is that Golding misunderstands human nature. Or children. Or teenagers. "Stranded kids wouldn't turn violent or harass one of the other children." Especially not a poor sweet fat kid. Here's a typical example:


_Lord of the Flies_ is, we are told, a novel about human beings and their nature. It's a shame we see so few human beings in the book. Golding seems to see savagery as the natural and instinctive state of humanity, a position that's logically untenable (if this was the "natural" way, exactly how did we acquire civilization at all, let alone keep it long enough to develop the printing press necessary to spread such [negativity]?)

Now, read this excerpt from a reviewer who is named A KID'S REVIEW. 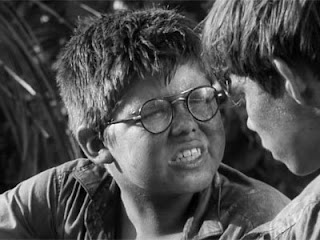 My favorite chapter in this book would definitely be the first chapter when the kids are introduced on the island. There was this one kid that everyone had called piggy. To me that is the funniest thing in the world. I don't know why but the humiliation of another kid is extremely hilarious. It may seem cruel but to me it's funny.

Hmmm. I can't imagine A KID'S REVIEW thinking it would be funny to put together a mock hunt for Piggy in the jungle, then getting overly serious about it.

Now we turn to our favorite one star reviewer A CUSTOMER who had this to say:

This book was very disturbing, sick and wrong. Other than the fact that it was very boring and lost my attention, it also very much revolved around murder, cruelty, and other acts of meanness in the second half in the book.

This would be a good movie trailer. MURDER! CRUELTY! BOREDOM! Those words fit together so well.


The next reviewer has a different point of view. He titles his review, "Yow! Lots of people wrote stuff, huh?":

This book stunk. I believe that reality can have deeper meanings, but don't get to deep or you'll drown. The only time you can go that deep and not drown, is with drugs. I never thought Lord of the Flies would attract so many druggies.

Oh dear. I didn't think you would need to hear this, but you should not review books when intoxicated or under the influence of controlled substances. Please, people, review books responsibly.


Finally, our last reviewer, who believes that this book is worth only one out of five stars and simply titled his review, "I didn't really like it." Here's a piece of advice for the author, Mr. Golding:


Mr. Golding is a very talented writer, but I don't think this was the best he could do.

Yeah! Try harder, Mr. Golding, you lazy author! All I can say is, I hope this reviewer doesn't end up stranded on a desert island with the author and a sharpened stick, as I'm guessing he'll discover just how hard Mr. Golding can try to do something.


Ah. I think I hear a jet-powered future-boat arriving outside, as if a deus ex machina is the only way to make this savagery come to an end.

Here are more Ridiculous One Star Reviews at battle for dominance.


QUESTION: What is your experience with the Lord of the Flies? Did you love it or hate it or something in between?

Posted by Matt Mikalatos at 6:44 AM