Okay, here's the short of it: this is one of the best, most powerful movies I've seen in the theatre in a while. It's the sort of movie that sticks with you whether you like it or not, haunts you, makes you think and keeps coming back to you long after the last moment of the film. I can also say with complete honesty that I haven't been this terrified by a movie,maybe ever. My dad said the last time he had been this frightened by a movie was when he saw Jaws when it was first released. 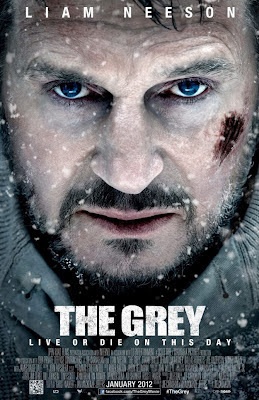 The Grey is the story of John Ottway (Liam Neeson), a specialist hired by an oil drilling company in Alaska to keep their crews safe from wolves. On the way home from a remote location via plane, a hard-boiled crew from the company crash land in the Alaskan wilderness. The survivors of the crash find themselves in the "kill zone" of a pack of gigantic wolves and must brave the elements, the wolves and each other as they try to survive and make it back to civilization. I heard that this movie was intense. I thought, yeah, I've seen a couple of "Man vs. Nature" movies, I know what to expect. I was wrong.

This Tuesday my dad and I trekked off to the theatre to watch The Grey and it was everything you would want in a thriller: exciting, lots of action, clever moments of innovation from our heroes, chase scenes and people working together to overcome the worst sort of odds. But it was also scary. There weren't a lot of cheap scares, either (i.e. s guy is just talking and SUDDENLY A WOLF BITES HIS FACE OFF ACCOMPANIED BY LOUD MUSIC). In fact, a lot of times the subtlety of the filmmaking, implication and suggestion made it even more frightening, like in one moment where the wolves are just outside the light of the campfire, but when they howl you see their breath rise up into the light. The sound, too... I couldn't believe how much of the tension in this movie comes from the sound of the wolves howling.

Honestly, my dad and I stood in the parking lot for a while after the movie between our two cars, trying to figure out when we should walk away from each other and toward our cars. Because, you know, there could be wolves here in the city parking lot. It's totally possible.

The amazing thing about this movie, though, is that while it would have been a complete success purely as an action film, it's a great deal more than that. The philosophical underpinnings of the movie are extremely well done, entertaining and thought provoking. It's not a movie about surviving the elements, or wolves, or even man versus nature, it's a movie about love and loss, embracing our mortality, masculinity, fighting for life, the existence of God (and our questions, struggles, fears and frustrations about this question). In fact, this level of the movie made it even more enjoyable. I found that questions that would pop up in my mind ("Would wolves really do that?") were completely silenced by the philosophical and metaphorical levels of the movie ("It doesn't really matter, does it, because that's not a wolf, that's the fact of our mortality. That thing is Death itself.").

In the days since watching the movie, I've been thinking about it a lot. Not just the movie, but about my own life. Who do I really love in life? Am I treating them the way I should? Getting the time with them that I should, given the fact of my own mortality? Am I ready, when that time comes, to live and die well? Am I brave enough to run toward those who are in trouble and suffering and facing death rather than away from them? Which is all to say: this movie is terrifying, entertaining and profound. We need more movies like this one. It's life changing. I loved it. And, for those of you who want to know about the technical side of things... everything was done well in this film. The writing, directing, cinematography and acting are all beautifully done. The sound was amazing. The effects for the wolves were excellent. It's a great film, and you should see it on the big screen.

So, if you're looking for a movie tonight, or this weekend, check out The Grey.

Here's the trailer: p.s. Apparently there's been some manufactured controversy about the fact that the wolves in the movie are hungry forces of nature bent on destroying all the humans. To which I can only say, lighten up, people. That is not the point of the movie. What next? Are you going to complain that the blizzards are trying to kill them, too? Why are blizzards always bad guys? It's not fair. Boo hoo.
Posted by Matt Mikalatos at 4:34 PM