M.S. Corley is the artist on a comic book mini-series called The Strange Case of Mr. Hyde

, which has just been released as a graphic novel/collection this week. The story, written by Cole Haddon, is about a Scotland Yard inspector named Thomas Adye who discovers someone is murdering prostitutes in Whitechapel... a certain "spring-heeled jack" whom no one can catch. Driven to find help in even the most unlikely places, Adye turns to a secretly incarcerated criminal, the infamous Mr. Hyde (from Stevenson's Jekyll and Hyde story). What follows is a bloody, philosophically-oriented thriller as Adye and Hyde attempt to stop the murderer... and Hyde attempts to bring out Adye's darker side.


RIGHT NOW, M.S. Corley is offering free marker drawings (subject of your choice) if you send him proof that you bought the graphic novel, which is a fun way to get some comics and some original art!


For those who are reading with small kids or are sensitive to language, violence or dark stories, I'd say this book certainly would earn an R rating as a movie, so keep that in mind if you're considering purchasing the book. It's not for kids.


I asked Mr. Corley to answer a few questions about his work on the series and he graciously agreed:

Mikalatos: So I've heard that writer Cole Haddon chose you as artist based on your unique style. Who are some of your artistic influences?

Corley: I'd say my biggest influence is Mike Mignola, he’s the reason I started reading comics regularly, realizing there was something other than superhero stuff out there (which is a huge genre, but it just doesn’t appeal to me). Other than him I try to find a variety of artists I enjoy and catalog their work on my computer to reference back, be inspired by or just get sketch practice from. To name some names, Akihiko Yoshida, Sam Bosma, Duncan Fegredo, Asaf Hanuka and Tetsuya Nomura.

Mikalatos: Were you a fan of Hyde or supernatural stories in general before you started on this series?

Corley: Absoultely! I've been a huge fan of supernatural fiction since as long as I can remember. Something about the unknown world of the supernatural has interested me since I was a kid, I remember even back in elementary school I would look up books on Big Foot or UFOs or Ghosts in the library. As I grew older I started reading a lot of the pulp era work, and turn of the century stuff. I love old classic English ghost stories by M.R. James

. Other favorites being William Hope Hodgson

. My favorite time of the year for books is right around Halloween as the stores always put out new anthologies of ghost or supernatural stories and I buy up the lot each year.

Mikalatos: You and I have talked a little bit about how we're both Christian, and some of the challenges you face as an artist in the Christian community. What has been your experience with Christians looking at your (pretty dark, pretty violent) comic book series, and how do those two worlds overlap?

Corley: Most of the time it’s negative unfortunately. I think a lot of (perhaps legalistic) Christians don't understand why I would spend my time working on such things. Why draw such worldly things? I imagine they think I should just be drawing pictures of doves and Jesus all day. But this stuff interests me, I like ghosts, I like monsters! That's the kind of guy I am, and I don't believe Jesus looks down on me for it. But I do have lines I don't want to cross, specifically I'm not interested in drawing nudity. Not because I believe the naked body is bad, or sex is bad or anything like that. I just think it’s a slippery slope in the industry. Comics and art can be great without having to constantly draw scantily clad big breasted women running around. That’s why I love Mignola books so much, they're about great stories and great art.

Mikalatos: I understand that Hyde was your first full length comic mini-series. What lessons did you learn along the way as an artist?


Corley's answer to this and other questions (including the concept art that got him the job on this series) are below the cut:

Corley: I learned to be a bit less of a perfectionist, because really there isn't enough time to be. Also I was never that big on drawing backgrounds or cities or anything like that, so working on this really pushed my abilities. And I think that shows, but I think it also taught me a lot. I don’t know if others see it, but I feel like there is a lot more confidence in the art of issue 4 compared to issue 1.

Mikalatos: What artistic work of yours are you most proud of?

Corley: Well I'm proud that I was able to complete multi-issue comic. It is crazy hard work and has given me a lot of respect for others in the industry. Other than that I’m proud that I have been able to complete an illustrated version of the Jungle Book as working on a children’s book has been a goal of mine. And having the chance to make a few book covers over the years, which is also another big goal I’ve had.

Mikalatos: What other projects do you have brewing over there in your secret lab?

Corley: I've been working on my own comic for a couple months now, based off the character Thomas Carnacki created by William Hope Hodgson. I did a bunch of pin ups to practice drawing him and get down the coloring style I want to use for the series. And now I am currently working on the first issue which I am really excited about, my plan is to have it done by May assuming everything goes according to plan.

Mikalatos: Cole said that you sent him some concept art that really sealed the deal for you being the artist on this project. Any chance we could see some of that stuff? 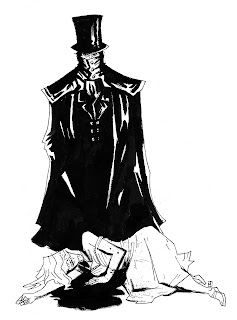 Corley: I think one of the main pieces that helped was this pin up of Jack standing over a recent kill. Then I did these mock ups of some of the characters for the book, which look very different in the finished comic. I did a couple pages of characters sketches that you can find in the back of the Trade Paperback as well. 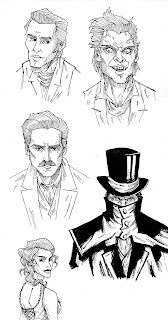 Mikalatos: What do you use for your art? Are you a digital guy or do you draw everything on paper? What sort of equipment/supplies do you use for something like Hyde? Depends on the project, though I try to fit a little bit of traditional art into everything that I can. Sometimes I will work out a sketch and then scan it and redraw and finish it up in Photoshop. For the comic I draw all the layouts and ‘pencils’ in Photoshop and then ink those on actual comic boards. I know most comic guys pencil their pages right on the boards from the beginning but I learned that I make so many mistakes and erase so much I pretty well ruin a board before I can get to the inking stage so this works better for me. For inking I use a Staedtler Pigment Liner

0.1 and I brush the blacks in larger areas with Sumi ink.

Mikalatos: Any advice for aspiring artists out there?

Corley: Draw more, every day. It’s the only way to get better. A teacher once told me there are a hundred crappy drawings in front of each good one, so you have to draw a lot to get the crap out of the way. Besides that put your art online, that’s the easiest way for people to find out about you.

Mikalatos: If you could study under one artist from any time in history (present or past), who would you choose and why?

Corley: Study under? I’m not sure. I once sat in a panel at San Diego Comic Con where Mike Mignola drew a Hellboy piece while he answered questions and it was an amazing experience. Just seeing how he draws was so inspiring, that sounds goofy but it was. If it was someone from the past I would love to study under Alphonse Mucha. Everything about his art amazes me.
Posted by Matt Mikalatos at 9:29 AM