Fasting Day Thirty-Eight: "after forty days he was hungry"

I've heard a lot of people over the years talk about how, when Jesus is being tempted in the desert, the Bible says "after forty days Jesus was hungry." Usually people will say something like, "Duh, of course he was hungry after forty days." 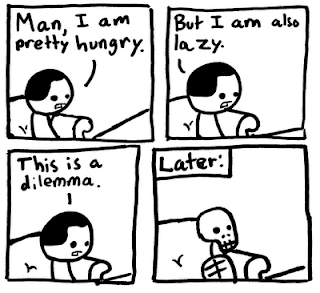 It seems to me that it's probably a reference to a common phenomenon during extended fasts. For most people, hunger essentially goes away sometime late in the first week of fasting. I think for me it was around day six this time. For some people it will come as early as the end of day two. After this, you still have occasional hunger pains or a rumbling stomach, and certainly the occasional psychological desire for food, but your body is relatively satisfied. As I understand it, this is because your body has switched over from burning glucose to burning ketone. Essentially, instead of processing sugar from food, it's processing fat from your body.

While in ketosis (the state in which your body is burning ketone) you just aren't all that hungry. Like I said in a previous post, I'm hungrier when I'm eating than when I'm fasting. It's like my body just sort of gave up and left a note with the brain that said, "Hey, if you see if any food laying around you should grab it and eat it."

And that's all well and good for about forty days. Sometime between the 30th and 40th day most people hit the "emergency" level, where there's about 7% or less of the available fat for the body to burn. The body starts gearing up to "eat" muscles and, yes, your brain. At this point, no longer satisfied with a polite note to the brain, the body decides to make it clear that we've hit the emergency zone and yes, it's time to switch back to eating food rather than entering auto-cannibalism.

No one disputes this is the end of any voluntary fast. It's the moment where your body says, "Play time is over, it's time for you to eat."

My hunger came back today. It's not playing around. When your hunger comes back, it's rough. I feel the worst I've felt the whole fast, maybe the worst I've felt in my life. I can't concentrate, can't really think about anything other than making it stop... which I know is as simple as a mouth full of bread.

Which, I think, is precisely how Jesus was feeling physically when the adversary said, "If you are truly the son of God, turn these stones into bread." He was tempted when he was at his weakest, feeling his worst, his body completely coming apart. And he overcame all that and followed the path God had set before him.

I'm disappointed that my hunger has returned this early, with two days still to go, but I'm hopeful that there are good things to come....
Posted by Matt Mikalatos at 5:05 PM