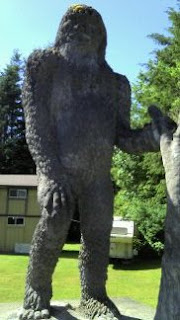 So, here we are. The end of the road.

I got up this morning and packed some juice and water and headed for Mount St. Helen's. I've been up there once before when I was spending a day in prayer and found it to be a place where I could get away from the rest of the world for a bit.

Krista and Nurse Shasta were both concerned that I was going off into the wilderness when I had almost fainted yesterday and both bound me with bold promises to make sure that I would text often to fill them in on where I was and how things were going. Much to my chagrin, I discovered that my cell service disappeared at about the same time that I passed the Sasquatch. Yes, there is a Bigfoot "Museum" near Mt. St. Helen's. Supposedly there have been some great sightings of the elusive beast in the area. All I saw was this giant statue, but you can bet I kept my eyes peeled for a real one.

One of the things that I experience at Mt. St. Helen's is a reminder of the scale of things in life. For one thing, the mountain itself used to look like this:

It erupted at about 8:30 in the morning, and ash from the plume reached Idaho by noon. It varied from 12 to 16 miles above sea level, and continued to erupt for over nine hours. Although most people had been evacuated, there were some who remained nearby who died in the aftermath of the eruption. Trees for miles around were destroyed by the eruption, the mud flows or the superheated ash. Many of them were essentially instantly petrified because there wasn't enough oxygen in the air for them to catch fire. At one ranger station I went to, they had a tree section that had been well over 1,200 years old that was uprooted in the explosion. That really struck me. A tree that outlived my ancestors, brought low by the volcano.


Now if you look at the volcano from the North side, this is what you see. It completely blew off the top of the mountain, and the North side of the mountain was largely destroyed. As you drive toward it, you can actually see where the edge of the tree line is, where the trees were destroyed and are coming back to life... the entire forest in that area is the same age. Now life is returning to the area and there are deer and elk and beavers and all sorts of woodland creatures making their way back to normal life near the volcano. Interestingly, the explosion creates very rich soil, so although the destruction was intense, the returning life is lush and vibrant. 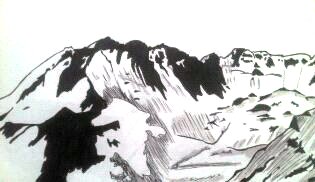 I felt almost overwhelmed with the possible spiritual metaphors in the midst of all this. The grandeur and glory and might of God. The destructive power inherent in the volcano, the slow process of life's return to the once barren land, the increased fruitfulness of the new life, the people who ignored warnings about the mountain and paid the price, the fleeting nature of life, the length of a tree's life outweighing that of a human being by far.

I stopped and took some time to sketch the mountain, and though I'm not a great artist, it helped me to stop and really look at the details, to see it more carefully than I might have otherwise.

And in the midst of all this, I was waiting to hear from God.

He spoke to me in all of this... about change, and transformation and power and preparation for things to come. No great specifics, nothing that a skeptic would hear and say, "You're right that must be God." But I'll tell you this... I felt his presence throughout the day, like he was alongside me, like he was with me and speaking to me throughout, the same way that I would experience another of my friends who had come along for the day. He did say a few specific things, but they're a little personal for sharing here... suffice it to say that I heard from God, and that it was a meaningful and powerful time.

I drove home and met Krista and she and I went into Portland, and I shared with her some of the things God had said to me, and we talked about what it might mean and talked a bit about the fast and how it had gone. We went to a Thai restaurant and I ordered a salad roll... basically a Thai salad wrapped up in a rice wrapper. I don't care for them, but I knew I had a chance of this sitting well as my first meal. I have never tasted anything so good. After we had prayed and I took my last bite, I nearly started to cry. I am so happy to be eating again, and so thankful that the fast is over.

Was it worth it? God didn't say anything to me that he couldn't have said while I devoured an entire pizza. But I will say this... I wanted to hear from him more passionately than I have in a long time. He certainly had my full attention at the end. It was hard, and there were days when I hated it. But it was worth it, yes.

Now it's time to re-enter the real world. and I have to admit there is some fear and trepidation in that, too. But it's time to leave the wilderness and enter the cities of human companionship again. I look forward to sitting with you and eating a meal, and talking about it together.
Posted by Matt Mikalatos at 5:01 PM