We met Donald Glover from Community today in Portland!

Shasta and I were downtown today to meet with some co-workers from New Zealand, when Shasta pointed out that Donald Glover happened to be standing in the sitting area of the coffee shop/hotel that we were meeting in. 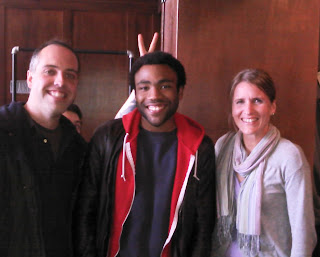 As you can see in this picture, one of our friendly Portlanders snuck into the back of the picture to give Donald some rabbit ears. Nice. Thanks for that, Portland.

Anyway, we asked if we could get a picture because Tifah and Reid from the Autumn Film kept sending us all these pictures, bragging about how they met Danny Pudi a while back. Anyway, they gave Danny a copy of their CD, so I gave Donald a copy of Imaginary Jesus

. I am guessing he is using it as a coaster in his hotel room at this very minute.

I told Donald that we had watched the season finale of Community last night, but it turns out that wasn't the finale. He told us that (SPOILER) the finale this year is a gigantic, epic paintball episode. I'm looking forward to that... the first episode of Community we ever saw was the paintball episode. And YES, The Autumn Film introduced us to the show. I know they'll want credit for that. ARE YOU SATISFIED NOW, TIFAH?

Anyway, I know you all want to know all the juicy details. But basically they are these: Donald was cool. He was in town for his comedy/music show. He's doing a couple shows in California and then headed to Las Vegas. He's probably lurking the streets of Portland right now.
Posted by Matt Mikalatos at 10:56 PM