Ley Lines and "The Skin Map"

.  I got a free copy of the book for this "tour" with the other members of the Christian Science Fiction and Fantasy blog tour. 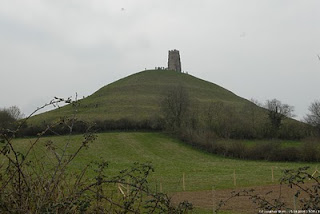 noticed that certain ancient sites seemed to criss cross Britain in straight lines.  Curious as to why this might be, he set out to study these significant line ups of ancient wells, walls and monuments.  He eventually came to call these ley lines, and hypothesized that the lines were actually correspondent to some sort of energy underground that moved in straight lines and had somehow been sensed and used by the ancients.

Watkins' theories were met with nearly universal dismissal until, several decades later, several New Age authors latched on to the idea that (depending on the author) spiritual power or electromagnetic fields were moving along these geographic lines.  And, they've been fodder for fantasy novels, science fiction shows, New Age rituals and comic books ever since.

Lawhead uses them for his own purposes, like everyone always has.  In Lawhead's book, ley lines are somewhat like fault lines... places where separate worlds and/or dimensions rub up against one another and create the possibility of traveling between worlds. More about this in later posts, but suffice it to say that "energy field that transports you to other worlds" is a great deal more exciting than "supposed energy field that probably doesn't exist but could be one explanation for some stuff being in a straight line."

And if you don't believe me, check out this trailer for the book:

My plan in the next couple of days is to talk about Christian fiction in general and how Stephen Lawhead's book relates to that, as well as a review of the book itself. A bunch of my friends will be talking about the book over the next few days as well... check them out: