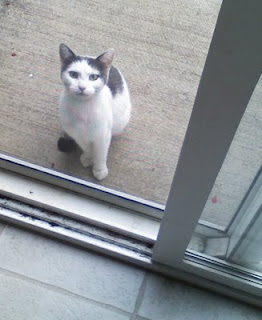 This week our neighbors to the West got a dog.  This by itself would not be news, as many people in our neighborhood have dogs.  HOWEVER, when I asked the youngest nieghbor what happened to all her cats she said, "They're gone."

I know that the cats next door lived life to the hilt.  They were several generations of chain-smoking, rough and tumble, sex-starved reprobates.  They ate frogs. They stalked children. They brought fear to the neighborhood.  It seemed inconceivable that they could all be gone.

And yet... as I interrogated the child I discovered that several of the cats had "run away" and that one of the boy cats "had babies and then ran away."  And then I remembered that "ran away" is often a parent-euphamism for "fell asleep in the dryer and I didn't notice" or "thought the engine block would be a warm place to hide."

In any case, Gemma the cat, her daughter Gemma the cat, Gemma the Second's kitten, Toey, and Toey's little of cats that soon followed are all gone now.  Perhaps they ran away or perhaps, as I was told later in a complete contradiction, she was "sold."  Regardless, an entertaining part of our neighborhood has been removed, and thus we must fondly remember Gemma "Tiger Cat" and her progeny.

Here are a few of the previous reports from the neighborhood which included news related to Gemma and her descendants.
Posted by Matt Mikalatos at 6:12 AM

Email ThisBlogThis!Share to TwitterShare to FacebookShare to Pinterest
Labels: cats, news from my neighborhood