The Death of Snow Hitler

I met my best friend Chris when we were in high school. We therefore have a lot of
"in jokes" that no one will ever get (like, 'Heh-heh- HI! My name is Tranio!'). These jokes are funny to us and not to you because you weren't there and you don't get it.

But then there's a whole other class of jokes that are funny to us and not to you because we have a weird sense of humor. There's really no one who makes me laugh as hard as Chris does. And while Chris doesn't laugh at all my jokes, at least he gets them and knows why I thought they would be funny.

Case in point... in the 90's it was hip to make these hand made greeting cards. It seemed like everyone was making these things. I would sometimes go over to my then-girlfriend Kerry's house and we would make some of these things. And I made the one below for Chris while he was a traveling Karate photo salesman. 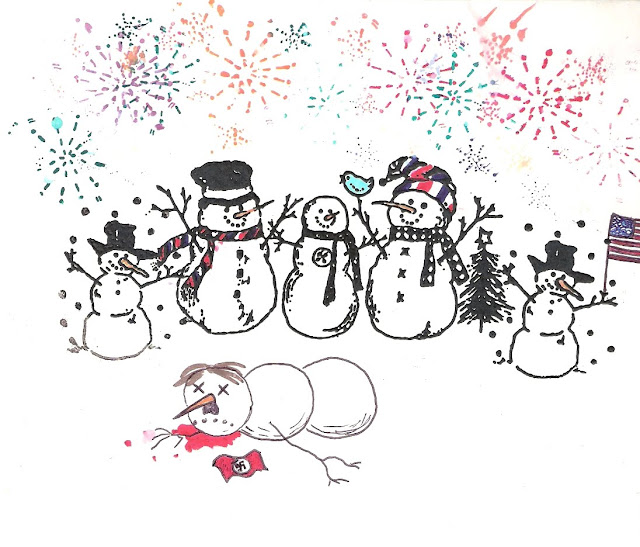 When Chris found the card he wrote the celebratory poem below:

THE DEATH OF SNOW-HITLER
face down in a puddle
of third-reich red blood
Snow-Hitler's x'ed out coal eyes
are spared the sight
of subhuman 'sno-men smiling at his corpse
the scum of snowmankind
have inherited the Earth
dancing for joy up to their snowballs in
each other's crystal white feces.

AND, for those of you who think I am making Chris up and are saying to yourself, "I know for a fact that Matt doesn't have any friends, let alone one who gets his sense of humor" then I invite you to print a copy of this greeting card, go to Island Framery and get it framed while Chris tells you stories and jokes.
Posted by Matt Mikalatos at 6:30 AM

Email ThisBlogThis!Share to TwitterShare to FacebookShare to Pinterest
Labels: art, chris, Hitler should be beaten up by a man in red white and blue pajamas and silly floppy boots, poetry