She's got herself in stitches 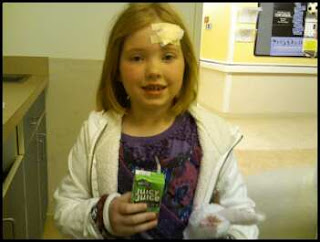 Sunday night after a celebration of my Mom's birthday, Shasta brought the kids back over to our place. A got out of the car laughing at the name of Shasta's sheep when she was a kid ("Monster", which A had decided should have been called "Monster Booger"). This created a storm of laughter which caused A to double over and then split her head open against the side of the car door.

After a LOT of crying and phone calls and me trying to put it off we decided that the cut was too wide not to be addressed by the professionals, so I took A down to the ER. Of course my kids always do these things when the regular offices are closed. They prefer the more expensive care of the ER.

A was (understandably) upset, and there was a lot of tears, sobs, hyperventilating and reminder to breathe normally. After a couple of hours we got into the back (by the way -- in t.v. shows the ER constantly has people with pipes sticking out of their chests and things like that being brought in and all the doctors have to stop kissing in the supply closet to go take care of it... I mostly saw relaxed doctors and people who looked vaguely in pain) to see the doctor.

A's unassailable terror of getting stitches came out when the Dr. said she was going to need a couple, so they left me in the room for twenty minutes to calm her down. I kept telling her that it was going to be all right, that I was her Dad, that she could trust me, that I promised it wouldn't hurt much, that I would protect her if anyone tried to hurt her. I finally convinced her she would have to sit still when the doc came back.

Which she did. The stitches (2) went fast. A got a stuffed bunny rabbit. From start to finish, A's head wound only took about five and half hours to deal with. Whew. We were exhausted.

I learned many lessons from this time:

1) The fear of the future is often worse than the future itself. A's four hours of exhausting terror about the coming stitches were far worse than the four minutes of calm as the doctor actually provided them. I have this issue myself. I can get wrapped up in 'what ifs' and worst case scenarios that are far more upsetting than the actual future I run into. In the end, A didn't really like getting stitches but now she has a new bunny and her cut is healing faster.

2) You can trust your Dad when he says it's going to be okay. A says she'll know this is true next time. Stitches don't hurt. I know I don't always trust the people who care about me and know my situation. I certainly don't always trust that God is in control. But this was a good reminder that I can trust Him in the midst of frightening or difficult circumstances.

3) Once the question of 'is this going to hurt' is out of the way, a young lady's next question is, 'Will this effect my looks'? Once A was relatively certain that the stitches might not hurt she started asking if her cut was ugly and were scars ugly.

4) I'm surprised this hasn't happened already. Let's be honest. Something funnier than 'Monster Booger' gets said in our house pretty much every day.

5) Kids' vocabulary makes me laugh even when I shouldn't. When A heard she might have to have stitches she burst into tears and shouted NO THEY CAN'T PUT STITCHES ON MY HEAD! MY HEAD IS FRAGILE!

6) When your six year old has to go to the ER it's okay to spoil them. When they feel so lousy that they don't want a milkshake, the least you can do is offer them one.
Posted by Matt Mikalatos at 3:32 PM

Email ThisBlogThis!Share to TwitterShare to FacebookShare to Pinterest
Labels: A, hospitals, stitches