Dedicated to the well-meaning eight-year-old girl at the Portland Zoo, who wanted my children to know the truth about the animals around them.


Z: Dad, look at the crocodiles!

A: And why are there fish in there with them?


Me: When the crocodiles get hungry they slip down there and eat some fish.


Me: Crocodiles eat fish. Or, you know, pretty much anything that goes near them. Zebras, antelope, that sort of thing.


Eight-Year-Old Girl: Yes. Crocodiles will only attack if something tries to harm them. They are mostly vegetarian.


I gave that little girl my blog address and told her to look it up tonight. I wanted to be sure that she saw this picture of a crocodile eating a big bloody chunk of banana: 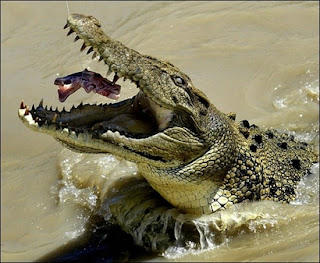 Crocodiles just like to suck on frogs and fish for the flavor. But they would never eat them.
Posted by Matt Mikalatos at 8:51 PM

Email ThisBlogThis!Share to TwitterShare to FacebookShare to Pinterest
Labels: A, eavesdropping, Z