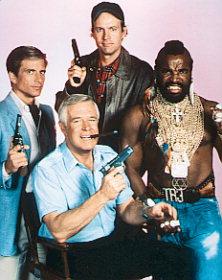 Mr. T has a new "reali-T" show called "I Pity The Fool." From the video clips I would say that this is possibly the best reason to invest in cable television. I don't have cable, but maybe some kind person will put my name on the list of people who should be visited by Mr. T during his show.

You know, it's interesting how much life as a WSN director is like being a member of the A-Team. I can't even remember how many times I've said, "You ain't getting me on no plane, Bubalo." But then he knocks me out somehow (it's usually Dan "Face" Weidner that does it) and I wake up in some foreign country, and Chip Scivique is standing there smoking a cigar and saying, "I love it when a plan comes together."

And, as all the stint team leaders already know, Andy McCullough = Murdock.
Posted by Matt Mikalatos at 10:05 AM