Dedicated to the worker at Hollywood Video, who had dressed in black and then wrapped a black t-shirt around his face. He then--in front of his co-workers who were dressed as a witch and a wedge of cheese--attempted to do an ill-advised flip behind the counter and landed on his ninja rump.

Witch: Do it again!

Cheese: You better watch it or we'll both get a shuriken to the forehead! 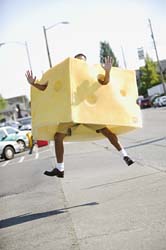 Email ThisBlogThis!Share to TwitterShare to FacebookShare to Pinterest
Labels: eavesdropping