What It Looks Like When I Graduate From Seminary 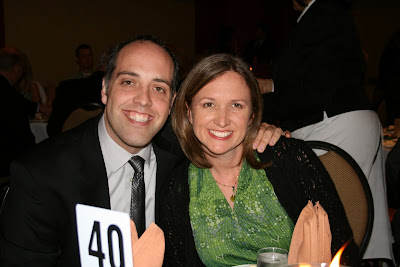 Friday night Western held the graduation banquet, which was actually a lot of fun and brought to mind a lot of reminders about why we came to seminary in the first place. I'll put a post up later this week about that. Krista, our parents and my sister Dawn all joined us at the banquet and so did a lot of our friends from Western and their families, of course. And why the number 40 in this picture? Why, it's my class rank, of course. Goooooooo, number 40! Oh, fine. It was the number of our table. Goooooo number 40! In other news, the napkins at the restuarant were made to look like human hands. Creepy. Notice also the uncontrollable flame in front of Krista. Because she is HOT! 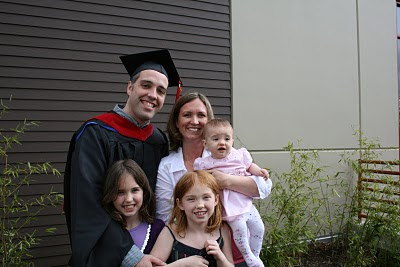 Here's the family, all celebrating together. No more class for Dad! Yay! The kids did an admirable job sitting through the ceremony. Here's the first picture of me with my Master's Hood. I liked it during the rehearsal when they kept referring to "The Hooding Place." It sounded creepy. It wasn't actually creepy, but that's how it sounded. The hood, unfortunately, was rented and had to be returned. 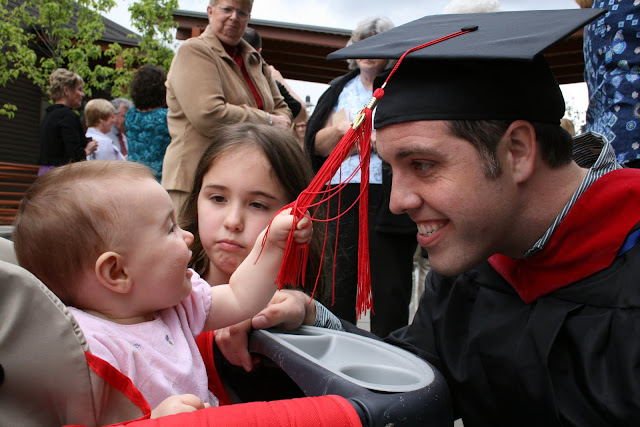 Baby M: "Dad, I am so glad you spent six years and many thousands of dollars for this great toy for me!  Yaaaaay, Dad!  It's attached to your head!"

Z: "Before I had a baby sister *I* would have been the one to yank those tassles."

Old couple in the background: "When I was younger, people had the proper respect for graduation tassles!  None of this letting babies touch them nonsense!" 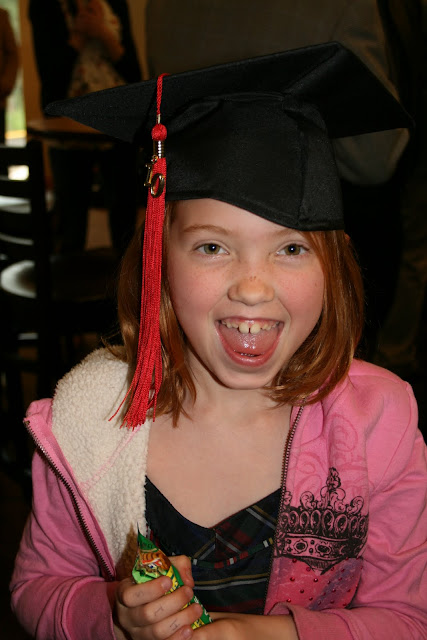 Lastly, I told A she could take a picture of herself wearing my cap, but only if the tassle was on the right side of the cap, since she hasn't earned wearing it on the left yet. TAKE THAT you seven year old non-graduate! Don't worry, she is planning to defeat my school-going record. Go for it, kid!

Many thanks to all my family and friends who came to graduation and the party afterward. I love you guys and am thankful for all the hard work, understanding and patience you have given me over the years while I was working on this degree!
Posted by Matt Mikalatos at 10:38 PM