President Obama is given a very special honor 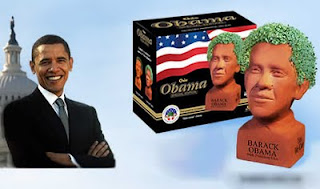 That's right.  It's Chia Obama.  Only three presidents currently have this honor: Washington, Lincoln and Obama.  When the five members who make up the Chia Committee were asked how they came to this decision, they said, "Let's be honest... only three presidents have had really great hair.  Okay, four if you count Clinton."  But Clinton was thought to be too controversial a choice, so they replaced him with the Statue of Liberty.

Congratulations, President Obama!
Posted by Matt Mikalatos at 12:46 AM