News from my neighborhood: THE STREETS OF LIZARDO! 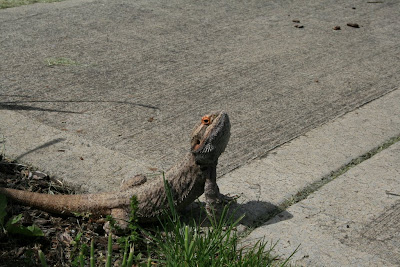 Walking the kids home from school today we realized that as people rounded the front edge of our lawn they would give out a high pitched cry of alarm.

This is because the foot-long reptile at left had cozied up into the daisys and would poke his creepy bearded head out as people walked by.

Of course the neighborhood banded together and honorary neighbor Ken The Conquerer documented the capture of the lizard here on video . It's well worth your time to see our neighbor April, who was right in the middle of dieing her hair, show up and catch the lizard single-handedly.

Z said she would name it "Freak."

But when the owner eventually showed up he said the real name was "Dynamite."

About an hour after the owner recovered the lizard he showed up again asking if we had seen it. I'm so glad we returned the lizard to the idiotic owner instead of taking it to animal control as had been the original plan.

And now an ode in song (to the tune of "Streets of Laredo"):

We sat down beside him
and took us some pictures
we caught him in a bucket
and taped it right up
we held him for his owner
we blogged all about it
we took us his freedom
and that was enough.

THE END
Posted by Matt Mikalatos at 11:26 PM