News about the New Star Trek movie (For Kerri) 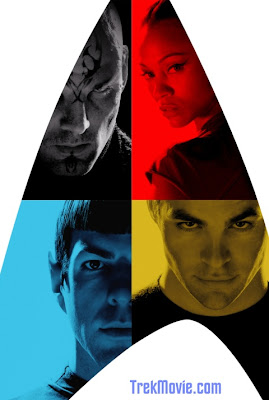 I have plenty of problems, but one of the biggest is my inability to be a committed enough fanboy to matter. I like comics, but I don't have a tattoo of Superman. I like(d) Star Wars back when it mattered but I never cared enough to cross-relate the comics to the movies to the novels. I never stood in line for the opening movie of any franchise dressed as the characters. I never had my face surgically altered to look like a Klingon. In the world of weird fans I'm just a mediocre side note.

But right now my friend Kerri is trying hard to become a Trekker, so I thought I would give her some early notice about next year's Star Trek movie. Here's the recently released teaser posters, with pictures of the new Kirk, Spock and Uhura, as well as the Romulan bad guy "Nero." Direction is by JJ Abrams, the LOST guy, so I think this might actually be worth going to see.

Oh, and Kerri-- don't make any plans for May 8th of next year.
Posted by Matt Mikalatos at 3:44 PM