We all know the story: 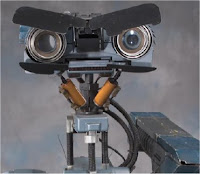 In the 1980s a robot designed for war gets struck by lightning and develops a personality and a conscience, and sets out to spread his message of peace. 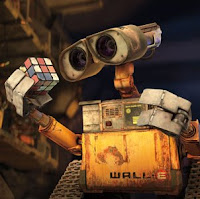 Let me try that again. Seven hundred years in the future a robot designed for planetary cleanup watches "Hello, Dolly" and develops a personality and a conscience, and sets out to spread his message of -- uh -- holding hands. And planetary cleanup (?). Even more spoilers await you if you choose to read on.

If you are an animation fan, you've already seen this movie. Yes, it's amazing in that sense. In fact, the interspersion of filmed clips into the animated bits is virtually seamless. It simply doesn't look that different than the excellent animation.

The story could have been a five minute Pixar short, however. The short before the movie, by the way, was hilarious and I would have gladly watched a movie about the magician and his trouble-making rabbit.

Things that bother me about movies like Wall*E are mostly related to the lazy world-building. Why did the world have a complete ecosystem collapse to make it uninhabitable for seven hundred years? Why would the first photosynthetic occurrence happen inside a refrigerator, where there would be no light (and presumably no rain)? How would this super plant survive the abuse it receives throughout the movie (including being exposed to hard vaccuum in space? Why did the people of earth have the technology to make enormous spaceships and complex robots but not the capacity to let the robots speak like people instead of like voice modulated answering machines? What has caused the complete collapse of human (and robot) personality to the place that the most affable and enjoyable beings in the movie are a beat up robot and a lone cockroach?

Why is it that even the villain is unclear? Is it the vast Wal-Martish corporation? Perhaps, but they are also the movie's saviors, as they invented Wall-E, kept the human race alive for seven hundred years and then returned them to earth. Is it the robot programmed to keep the human race alive and in space? I guess. He's about as threatening as a rogue paperclip, though. Or perhaps it is the combined forces of ubiquitous trash and an unstoppable flood of human obesity. Not exactly great enemies for a movie of this type.

Which may be why the kids kept trying to go to sleep. And Krista and I kept yawning. Don't get me wrong, the movie had its moments. But they were spread out over too long a period. If you had packed all the good stuff into a twenty minute mini-movie it would have been great. Award-winning, even. But as it stands it starts to give you that "I've been stranded in space for seven hundred years and I just want to go home" sort of feeling.

RATED G. Get a good night's sleep the night before.
Posted by Matt Mikalatos at 8:52 PM