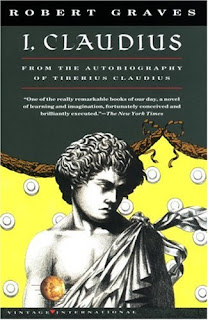 Tonight I finished the novel I, Claudius by Robert Graves.

I came across it because I was looking at the Modern Library's list of the 100 best novels. I was skeptical about the list because I've read some of the top novels and disliked them. Joyce's Ulysses, for instance, is at the top at the list, whereas I would scarcely call it a novel. As near as I can tell Joyce wanted to insult all the literary critics and did so by writing Ulysses and basically flipping them the bird. Which the critics loved and have spent many years fawning over his memory since then.

Fitzgerald's Gatsby is inexplicably number two. It's a fine novel, absolutely. But it ain't the second best novel of all time.
Anyway, I thought I would give the list a chance by trying a novel from it, and I chose I, Claudius.

And I am very pleased. It's a great novel. It's the story of Tiberius Claudius Drusus Nero Germanicus (called Claudius), a crippled, stuttering member of Rome's royal family who survives several increasingly evil emperors to ascend to the throne himself. Part history, part family epic, part philosophical exploration of History and historians, it's well written, profound and fun to read. I love the way that Graves paints the reality of a culture that deifies its ruler.

A great book always sends me searching for everything else the author has written. And yes, I'm planning to dig up all of Graves' books in the near future.

As for The List, I think I'll give it another shot. Apparently there are some great novels mixed in with the pretentious schlock. Oh, and by the way, if you go to look at the "reader's list" (the Modern Library allowed the commoners to vote on their favorites) be prepared for a lot of partisan nonsense sent in by drunken internet societies. For instance, the followers of Ayn Rand voted her novels to the top, immediately followed by L. Ron Hubbard's Battlefield Earth, courtesy of the Scientologists.

Lastly, I don't care what anyone says, East of Eden is a better novel than the Grapes of Wrath and ought to be on the top 100 list for sure.
Posted by Matt Mikalatos at 9:37 PM