Why I Love Democracy 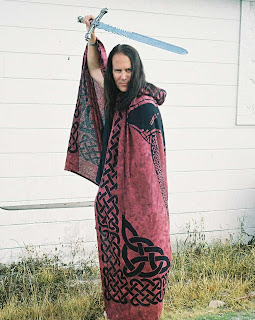 Presidential candidate Jonathon "The Impaler" Sharkey has threatened to "impale" President Bush after he is elected.
Sharkey is a self-described "satanic vampire". The secret service is checking in on him.
Law Professor Neil Richards asks the astute question, "'If he's a vampire, why is he the one staking people? Shouldn't he want to bite the president and feed on him?"

Sharkey has a very compelling platform. He plans, for instance, to remove every Supreme Court Justice and replace them all with Alan Page. As for a running mate, he has it narrowed down to Christine Todd-Whitman, Hillary Clinton or Elizabeth Dole.

In other news, Sharkey only dates "models or women who look like models." I was going to put a link to Sharkey's website, but I wanted to keep it funny rather than sad.

And now you all have just a little insight on what it's like to work in a comic book store.
Posted by Matt Mikalatos at 11:47 AM