CAPTAIN AMERICA IS DEAD for now 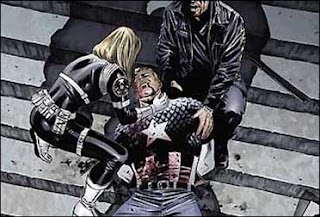 If you haven't already heard, Steve Rogers, aka Captain America was shot to death right where he ought to be safest... in his very own comic book.
Good old Cap started out beating up Nazis back in the old days and went on to be a founding member of the Avengers and to star in several awful television movies.
Now, one thing I love when a comic book character dies, is that if they are well-known enough, it actually becomes news!
Sad comments are made. The blogosphere lights up with angry fanboys! Well. Not really. Anyone who has read comics for long at all realizes that Cap will be back. This is because it is very hard to stay dead in Comic Book Land. When you live in a world where a radioactive spider might give you super powers, and getting caught at a bomb testing site without a radiation suit might turn you into a hulking monster, it's hard to keep yourself in the grave.
Remember the death of Superman? What's that you say? He's back, you say? You mean... it was all a ploy to get attention from the mainstream media and the plan all along was to bring him back to life?
Yup, that's right. It's all to sell books, my friends. Captain America will return. Probably on July 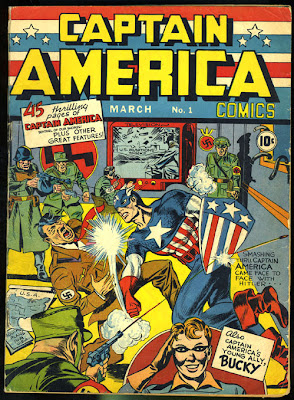 4th. Until then, I leave you with the cover of Cap's first comic. Take that, Hitler!
Posted by Matt Mikalatos at 10:05 PM

Email ThisBlogThis!Share to TwitterShare to FacebookShare to Pinterest
Labels: Hitler should be beaten up by a man in red white and blue pajamas and silly floppy boots