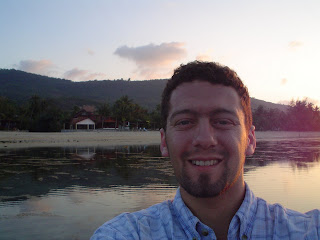 Rob was born nowhere near Missouri. He lived there until he traveled even farther from Missouri. He began writing abstract poetry at the age of 13 months, but untrained eyes saw only splotches and scribbles. Thusly frustrated in his early literary efforts, he spent the next several years learning "words" and "sentences." It was not until his 15th year that Rob again attempted to express himself in verse (excepting an award-winning poem called "A Book Is Your Key to Wonderland", written at the age of 8, which he still refuses to acknowledge as his own work). Rob spent 6 years in college (not in Missouri), until he almost completely despaired of the possibility of any sort of meaningful linguistic expression. During this time, Rob became enamored of something called "music," even daringly combining "music" and "poetry" into creations he called "songs." Missouri? Not yet. Finally, Rob moved out of the US (even farther from Missouri). Two years later, he returned briefly to the US (at which time he visited Missouri), then went back overseas, fell in love and married a woman who also had once driven through Missouri. He currently lives in a log cabin surrounded by a field of cows, planning his inevitable return to Asia, where "Show Me" actually means "skinny rice."
Rob has asked that I not reveal his last name, prompting me to adopt the name "Mister E" for him. I plan to eventually switch to calling him "O Mysterious Master of Missouri", but I plan to do this over the span of a few months so he doesn't see it coming.
I asked Mr. E what it would take to make poetry flower in the state of Missouri and he said, "For poetry to flower in Missouri, it must be planted deep- deep in the hearts of its people. I will dig with the spade of heart-level questioning, digging through the soil of culture and psyche. I will plant seeds of imagery, simile, metaphor, rhetoric, and prepositional phrases and fertilize them with pop culture phrases. Watered by the tears of those who thanklessly labor under the cruel tread of Apollo's chariot, I will cultivate in Missouri a flourishing garden of poetry."
I think you'll enjoy the first seeds of poetry included below. We particularly enjoyed Mr. E's playful use of language and insider knowledge of Missouri. We could tell he had spent several minutes there at some point in his past... no doubt they were glorious, ephemeral, scintillating moments of unparalleled glory.
Posted by Matt Mikalatos at 6:31 PM