LIVE: Night of the Living Dead Christian in Ohio and the UK

Of course you recall that last year Night of the Living Dead Christian released, a novel in which our spiritual state is discussed through the metaphor of monsters. One of the cool things that has come from that is some great conversations with spiritual leaders who are taking that metaphor and using it in their own churches for the month of October.

I also wrote this blog post about why Christians are afraid of atheists for JR. It's his birthday today, so go say happy birthday to him!

Monsters are more than the real, evil forces in the spiritual realm or the fictional special effects creatures in movies. Whether we admit it or not, we can all give into our worst side at times… we zone out like a zombie to certain things and feel like life is on autopilot; something sets us off and an inner werewolf of anger emerges; we turn into a kind of vampire who sucks the life out of others; there’s an assortment of other “B-level” characters that come out on occasion, too. Through this metaphor, we’re going to take a better look not only at ourselves but also what God is capable of doing in us if we let Him. It will be transformational and mash up the undead life we can easily settle for. 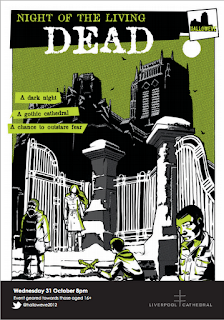 Lastly, you have to check out Liverpool's Anglican Cathedral, a service I am definitely wanting to visit sometime. Canon Richard White and I have become friends. He read NLDC and dropped me a line afterward (they had already done their Night of the Living Dead outreach by then, in which Canon White came into the service in a coffin, carried by some of the men in the church. I liked that so much I ripped it off and put it in the new NLDC short story). This event sounds like so much fun... they're actually taking their Gothic cathedral and making "zones" for different monsters... werewolves, vampires and zombies... and showing black and white clips of different monsters together with a message from Canon White. Should be pretty cool. If you're in the UK you need to go check it out and report back to us!


That's what's happening in Ohio and the UK this month. What's going on at your church? 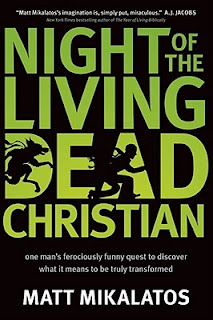 NIGHT OF THE LIVING DEAD CHRISTIAN

Night of the Living Dead Christian is the story of Luther, a werewolf on the run, whose inner beast has driven him dangerously close to losing everything that matters. Desperate to conquer his dark side, Luther joins forces with Matt to find someone who can help. Yet their time is running out. A powerful and mysterious man is on their trail, determined to kill the wolf at all costs . . .

By turns hilarious and heartbreaking, Night of the Living Dead Christian is a spiritual allegory that boldly explores the monstrous underpinnings of our nature and tackles head-on the question of how we can ever hope to become truly transformed.

Posted by Matt Mikalatos at 6:56 AM