Every once in a while I kick around comic book ideas. It would be really fun to write a comic some day. I've got a little secret project brewing that I hope I can share with you soon, together with my new buddy M.S. Corley, but in the meantime I thought I'd show you a comic I started writing and then decided to sit on.

I love Batman, but I miss the old days when he was a shadowy vigilante who used his detective skills and fisticuffs to beat up and outwit the bad guys. The Zorro style Batman, basically. I wanted to write a character who was that sort of guy... protector of the downtrodden, ordinary man, hero. So I came up with The Laughing Monk, a swashbuckling vigilante on the Mexican border who protects the people of the border town of Todos Santos. I sent the script to my friend Steve Downer and he liked it enough to throw me a quick sketch of the Monk... as you can see he kept to the Batman/Zorro inspiration, and I like it a lot! 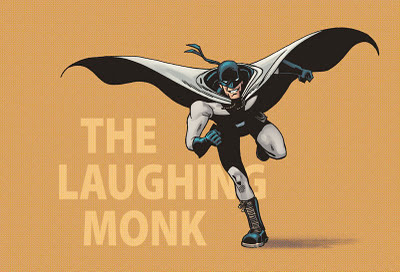 Here's the script for first eight pages of the first issue, and a synopsis of the first story arc. It would need another draft, for sure There are some things I'd need to change (my Catholic friends, for instance, tell me that the Father speaks like a t.v. priest instead of a real one). I named the main character after my maternal grandfather, just for fun, but if it were ever published I don't know if I'd do that.

Anyway, there you go, some fun for your weekend. Enjoy!
Posted by Matt Mikalatos at 8:52 AM

Email ThisBlogThis!Share to TwitterShare to FacebookShare to Pinterest
Labels: comics, the laughing monk