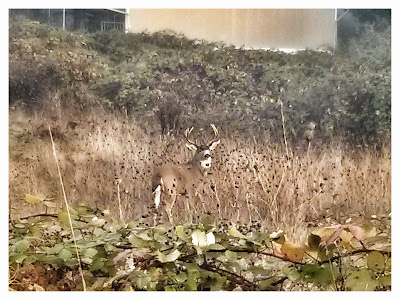 There was a light fog, and we saw this deer trotting along the road ahead of us. It looked like he was favoring his back right leg.

M was on my shoulders, so we stopped to look and I took this picture. I'm sure we looked like a terrifying two-headed monster and if the deer had a camera he probably would snapped a pic, too.

I said, "We must have scared him."

M: I don't think we scared him. It's probably all the Halloween decorations.

A good point from the four year old.

As we passed by him and headed toward the school he started huffing and trotting toward us. I started to think he might come after us. I figured I could get M into a nearby tree in time if he started to charge. But I really didn't want to fight him, because ever since my antlers fell off I've been afraid to fight deer anymore.