The other night I had a dream that my super powers finally kicked in. I felt relieved rather than surprised. 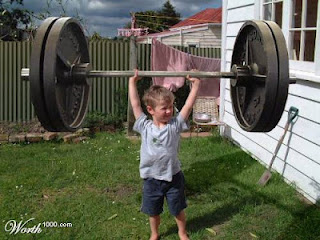 I knew intuitively that I should keep them a secret. Super strength was the first thing to kick in and kept asking, "Where's my spider sense? When I will be able to crawl on walls?" But no dice. Only super strength.

Then this weird guy with long, stringy hair started hanging around all the time, trying to take pictures of me. He kept asking me if I had powers and I kept telling him now... right up until the time he hit me with a car and pinned me to the pavement with his car. My upper torso was sticking out from under the driver's side of his car. He rolled down his window and said, "Are you sure you don't have any powers?"

"That's it," I said, and then I yanked myself out from under the car, crumpled the car door with my bare hands, yanked it off and then grabbed the guy and threw him over the building in front of us. I figured that was the last of him.

But then, when I was at my friend's party a couple of days later, he showed up and got a picture of me with some weird camera. I could tell it was sending the information somewhere else, not just a local camera (Spider-sense?). He gave me a creepy grin and he said, "I have powers, too. You're going to have do more than throw me over a building."

Then I woke up.

Next time I see that guy, I promise you, he's going to get more than thrown over a building. I'm not going to wait around and ask him questions, either. That guy is officially banned from my interacting in my dream time.
Posted by Matt Mikalatos at 6:41 AM