Dear Comic Book Publishers, It is time for you to hire me or I will reveal all your secrets

Back in January I made up some stuff about Marvel killing off Johnny Storm the Human Torch, including a storyline called "Torch Song" in which characters from the Marvel Universe would come together to share their memories about poor dead Johnny Storm.

Now Marvel has revealed that Amazing Spider-Man issue 657 will have a story called Torch Song in which Spider-Man and the Fantastic Four (well, the Fantastic Three) come together to share their memories about poor dead Johnny Storm. 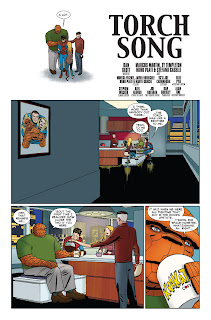 Which prompts me to say to all you comic book publishers out there... I am ready and available to write comic books for you. Feel free to contact me anytime.
Posted by Matt Mikalatos at 11:53 AM