One of the most divisive issues today (at least on the level of rhetoric) seems to be immigration reform.  Regardless, it's certainly one of the largest (if not the largest) civil rights issues facing us in the United States.  Sojourners sent me an email this morning with a discussion guide about four different movies about immigration, which you can download here. 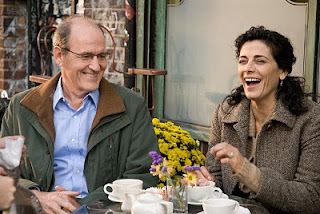 I've only seen one of the movies, The Visitor, which I enjoyed a lot.  It was a powerful, moving film that wasn't preachy, but used some immigrant characters as the catalyst in a story about a man dealing with the loss of his wife.  It has great acting and excellent writing.  In fact, I suggested that you watch this movie back when I first saw it.

The second film is called Made in L.A. and is a documentary about some sweatshop laborers who come to realize that they are being exploited and successfully sue the clothing company that is mistreating them.  I haven't seen this one, but the reviews are quite good.  Here's the trailer:


The third movie is called Dying to Live and also appears to be a documentary, with a broader look at the border in general and lots of interviews with a diverse group of people.

The last film is a third documentary, Farmingville.  After the attempted murder of two Mexican day laborers, in Farmingville, New York, two film makers move to town for a year to try to get the points of view of all the different people involved.  Sounds interesting.

So, there it is.  The discussion guide is designed to help create a conversation about these movies, what this says about our society and the role of Christians in this difficult question.  If you've seen any of these movies drop me a note, I'd love to know what you thought of them.
Posted by Matt Mikalatos at 7:39 AM

Email ThisBlogThis!Share to TwitterShare to FacebookShare to Pinterest
Labels: immigration