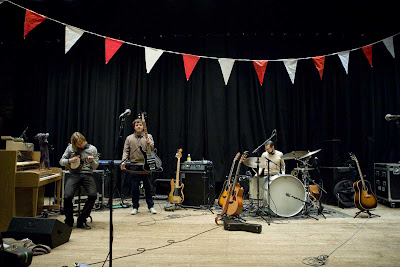 Let's start off by admitting that the picture on left is totally ripped off from the Fiction Family blog. The pictures that Krista and I took were more, um, artistic. But the smears of color were certainly beautiful.

Yesterday was one of those days where it seems like everything goes right. I took seven-year-old Z in for an MRI and she performed well, looking at the doctor in strained disbelief when he kep asking her if she was scared. "Why should I be scared?" she asked. She appeared to have fun and told me she almost fell asleep during it (Doc says all is well and nothing to worry about).

Then Krista and I met up and went into Portland where she had a couple of appointments, and I worked, with a brief break in a sunlit park to eat a street food burrito. Then we checked into a ridiculously fancy hotel that is having a sale because of the economy, so the overall price was about how much it costs to keep our house warm overnight. We grabbed some Lebanese food and then headed over to the Aladdin theater to see Fiction Family!

Molly Jenson opened the show. She did a fine job, she has an easy way of interacting with the audience and setting us up for what would come later. Sean Watkins came out and joined her on one song, and she ended her set with "You Are My Sunshine" which involved perhaps the funniest moment of the night when the sound/light guy made a shining sun appear on stage behind her and we all burst into laughter while she tried to sing the song in a serious, mournful way. She made good sport of it and we had a big sing along.

Then our fictional family took the stage, and I will say that the whole concert had a bit of the feeling of a very talented family hanging out together and doing an impromptu talent show. "Jon-boy, go get your banjo!"
Krista and I were talking last night and we both admitted that this show was better than the last Switchfoot show we went to (I KNOW... sacrilege... put down those rocks, my friends, do not kill me over this brief lapse). It was just fun, and you could tell the musicians were having fun, too. They sang some FF songs (this is from memory and not in order, folks... When She's Near, War In My Blood, Closer Than You Think, Betrayal, Throw It Away, Mostly Prove Me Wrong, and one they haven't recorded yet that made me laugh out loud and sit there with a goofy grin on my face called, I think, Rob Me or something along those lines). Sean sang a couple of songs as well, and (special treat!) his sister Sara was there, too, and they sang one of the best of the Nickel Creek songs, Somebody More Like You. Jon sang Resurrect Me and also Your Love Is Strong. the whole gang also teamed up for a fascinating, stripped down version of Radiohead's Idioteque.

Overall, it was a great mix. The Watkins siblings are superior musicians, and watching Sean play guitar was amazing, and of course Sara is ridiculously good on the fiddle. And Jon's vocals are always exceptional. I'm interested to see how this all plays out on the next Switchfoot album, as it's pretty clear that Jon is picking up some tricks from Sean.

It was a concert that made you feel good. It was a concert where you walked away thinking, it was fun to sit there and listen to my friends make music, and sing along and have a little conversation, and you were sad at the end of the night to say goodbye and it felt almost rude to walk out the back door instead of hanging around to say good night to all your friends on stage.
So goodnight Jon, Sean and Sara... and yes, Drummer Guy and Bass Player, Jon never introduced us but I assume we would be friends also. Good job everyone, and I hope that the next time you all are in Portland you'll stay with Krista and I. She'll get out her guitar and A will play piano and Z will sing and I will stand around with a goofy smile on my face or something.

I mean it... you guys better call us.

As for the rest of you, you still have a chance to catch the end of the tour if you're on the west coast. Here are the shows yet to play:
TONIGHT at 7-- San Francisco
FRIDAY at 7-- San Diego
SATURDAY at 7-- West Hollywood
Posted by Matt Mikalatos at 12:28 PM