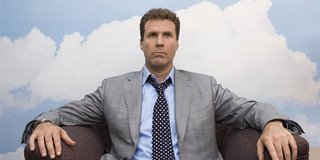 Will Ferrell stars in a movie about a man who can hear the narrator of his story. And he hears his narrator mention his "imminent death" which leads him on a journey to discover his life again.

And of course he has to fall in love, discover his genre, see a shrink, yell at disembodied voices and so on.

In the midst of it all, this movie actually works really well. You've never seen Will Ferrell like this before (unless you are his Mom, in which case, "Hi, Mrs. Ferrel!"). He's serious, nuanced and funny. No slapstick, no mugging for the camera. Maggie Gyllenhaal was spectacular, making you wish you knew the character she played so you could all just hang out at a bakery and enjoy some sort of crazy scones together. Emma Thompson is great as the narrator with a penchant for killing off her characters, and Dustin Hoffman, likewise great as the literature professor that Ferrel enlists to help him discover his genre. Queen Latifah somehow landed the only role that is played completely straight, and she does it well. I was amazed by the whole thing.

The best part about this movie is the way it balances the humor and the poignant emotional moments. The acting is terrific and the writing and directing are great. The whole "I can hear the narrator" bit is inconsistently enforced and essentially abandoned in favor of the love story, but I didn't mind. I actually wondered at some point if it wouldn't be better as two separate movies... the sweet romantic comedy and the fourth-wall-breaking thriller/comedy. But to be honest, it was balanced well enough to enjoy both. I'm usually one to prefer the fourth-wall-breaking over the romantic comedy, but the romance bits were so well scripted and acted that I found myself wishing for more of that and less of the author-in-crisis moments.

Overall, I have to say that I enjoyed this movie immensely. It was fun, sweet, silly, deep, nuanced and enjoyable. Go see it!