Coffee shops are for weaklings without original thoughts 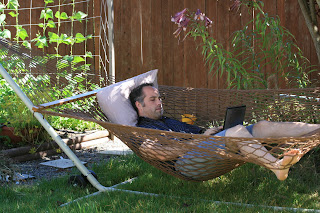 I've been working hard to finish up my second book, NIGHT OF THE LIVING DEAD CHRISTIANS.

Several of my friends have complained to me lately that THEIR friends keep asking if I spend a lot of time writing in coffee shops.  This is, of course, one of the stereotypical pictures of the writer.  Another would be me, smoking a cigarette over a typewriter while drinking copious amounts of booze.  But this is not how I work, no!  Coffee shops... too much coffee!  And I can't control the music that is being played which is distracting!  And I can't stop eavesdropping on the people around me!

Behold, my secret.  When writing I prefer a two person hammock, preferably brown with a taupe stand.  If a stand is unavailable it is acceptable to hang the hammock between two trees (12 to 15 feet apart, maple).  Shade is necessary to save on laptop battery power.  The pillow should be folded in half to give superior lifting ability.  Also, preferably to be delivered by someone else, along with occasional snacks.  Or meals.  Or just a quick visit to say, "I was thinking about how hard it is to be a writer and how gifted you are and how you are probably wishing you had a pack of cigarettes right now, and I just wanted to say I am proud of you and keep working because you are going to win a Pulitzer I bet or an Oscar or whatever prize it is that they give you authors."

But now it is night and I have moved in to the couch.  Imagine a similar picture, but with a couch and less flora.  That is what it looks like now.

And how is the book coming along?  Why just fine.  Now bring me some macadamia nuts.


P.S. Don't smoke cigarettes.  It is bad for you and the people around you.  And 90% of hammock related deaths happen because of smoking in hammocks.
Posted by Matt Mikalatos at 9:48 PM