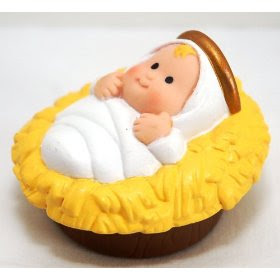 Tonight the kids got out the Christmas Little People.  They don't really play with Little People anymore except on rare, special occasions.  But that is why tonight I could hear them playing increasingly raucous games which eventually led 6-year-old A to burst into the kitchen and shout, "Z KIDNAPPED THE BABY JESUS!"

What followed was a chaos of sudden kidnappings of beloved Christmas characters.  It started with the baby Jesus, but it wasn't long until Magi, elves and jolly St. Nick found themselves incarcerated in a plot more diabolical than anything the Grinch ever came up with.  Daring rescues were staged (with the most dramatic and successful one freeing two wise men) until I finally stepped in an put an end to it all, finding that my holiday cheer was being sapped out like Jack Bauer on Christmas Eve discovering that he has 24 hours to stop a plot involving a fat man with nuclear waste that he intends to drop down chimneys.  But in the end, I thought it was the price you pay when you buy your children toys of Bible characters.  You have to expect that the story will be tampered with at some point (Z, for instance, when A pointed out that kidnapping the baby Jesus was Pure Wrong Badness said, "That's not the baby Jesus, that's baby Jessica!").  But that's how the end of the game came to be, and now all the children are in bed and we are enjoying the Christmas tree and feeling guilty about the Christmas cards sitting on our coffee table, unsent.

And, in a last, unrelated note, you'll see that the Fisher Price baby Jesus has blond hair.  Who knew?
Posted by Matt Mikalatos at 8:09 PM