Teaching my children vulgarities while watching the Princess Bride 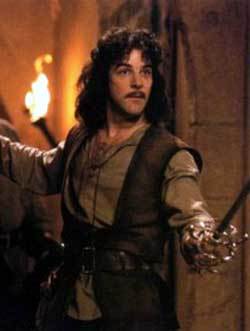 Yesterday morning, since the kids had the day off school, I told them that they could pick a movie to watch.  They chose the Princess Bride (which, to my way of thinking, was the correct choice.  And if you think I chose wrong, that's what so funny... while you weren't looking I switched the glasses!).

Anyway, (spoiler alert if you haven't seen this movie or read the book and let me add that you are causing me great sadness please go see this movie) as our master swordsman friend finally encounters Count Rogan in the bowels of the castle and confronts him at last, after all these years, you may recall that he eventually badgers the six-fingered man into promising him anything he wants and more and then he kills the Bad Man while also saying something unkind to him.  Take that!

Krista immediately gave me that look that said, "Your children have just heard some unsavory language and I better not find them upstairs pretending to stab each other with swords and slinging vulgarities at each other."

So I said: Hey kids, that one word is a bad word.  You shouldn't use it.

Poor kid is probably lying in bed wondering, "What is so bad about calling someone a son-of-a-birch?  Do they hate trees or something?"

And that is all I have for you today.
Posted by Matt Mikalatos at 12:19 AM