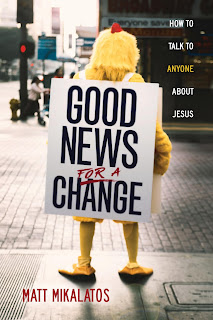 How to Talk to Anyone About Jesus.

Imagine an atheist sending you regular prayer requests. Or your coworker grabbing you by the arm and asking you to stay late at work to talk about God just a bit longer. When Jesus talked about the good news, people ran
to him.

We should expect the same response. Good News for a Change is about working together with Jesus to share the gospel in ways unique to each person’s situation.

Matt Mikalatos takes us on an adventure through evangelism as you’ve never seen it before. If you've been wanting to talk to someone about
Jesus but found yourself intimidated, apathetic, or afraid, try this guilt-free, enjoyable way of sharing the gospel: connecting to other people to find what Jesus’ good news for them really is.

Steph scribbled those words on a sky lantern before sending it off to her father who had passed away. Halfway across the country, Steph’s lantern landed in Matt Mikalatos’s yard.

As a father of three daughters, Matt could not let Steph’s note go unanswered, so he posted an open letter to her on his blog. Matt never could have expected the viral response to his letter that led him on a journey to find Steph—and to bring healing to thousands of others in desperate need of the loving words of a father.

Filled with paternal wisdom and reflections on the relationship between a father­ and their child, Sky Lantern shows how the miraculous events that followed Matt finding the sky lantern in his yard—and the widespread and lasting impact his letter had—prove that the bond between a parent and their child is everlasting.


In this hilarious, fast-paced, sort-of-true story hailed as “Monty Python meets C. S. Lewis,” Matt embarks on an incredible chase to find the real Jesus and ask him the one question that his Imaginary Jesus has never been able to answer. It’s a wild spiritual adventure like nothing you’ve ever read before . . . and it might bring you face-to-face with an imposter in your own life. This new edition now contains a discussion guide, an interview with the author, and other bonus features! (Previously published as Imaginary Jesus.)

Okay, okay. You caught me. This isn't non-fiction, exactly. It's a novel.

Read Chapter Zero (I dare you!)

By turns hilarious and heartbreaking, Night of the Living Dead Christian is a spiritual allegory that boldly explores the monstrous underpinnings of our nature and tackles head-on the question of how we can ever hope to become truly transformed.

Clearly a novel. I mean, I do have a neighbor who is a werewolf and everything but let's not get all caught up in an argument about what exactly constitutes "non-fiction."
Read the first chapter 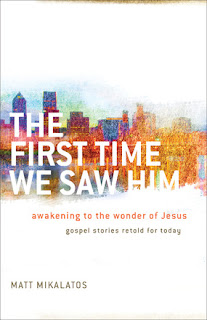 
Awakening to the Wonder of Jesus

Scripture tells us that the words of Jesus made people uncomfortable, confused, angry, repentant, worshipful, and riotous. Today, we read the words of Christ in a steady, even tone and find ourselves wondering if maybe we're missing something. Could it be that we've lost the emotional power of Jesus's words simply because we're too familiar with them?

With incredible insight into the surprising and unsettling aspects of Jesus's parables and life, Matt Mikalatos reimagines familiar stories and parables in a modern-day setting, bringing alive all the controversy and conflict inherent in the originals. Emotional, sometimes humorous, and even jaw-dropping, these stories raise provocative questions and offer a glimpse of Jesus as his contemporaries must have seen him.

Somewhere along the way, we've lost the plot to the greatest story ever told.

Matt Mikalatos invites us into God's story, both to find our place in it and to rediscover the wonder that the apostles and their listeners experienced. As you lose yourself in these modern retellings of the events of the book of Acts, you'll find that sharing the story is easier and more rewarding than you ever imagined.